VANCOUVER, B.C. (October 5, 2022): TEAM for a Livable Vancouver mayoral candidate Colleen Hardwick says a TEAM city council will work with the community to develop four new light rail lines across the city, in place of the costly Broadway subway extension to UBC.

“For the same price as seven subway kilometres to UBC we can bring 58 kilometres of state-of-the-art light rail transit to every corner of the city,” said Hardwick. “This single decision, with input from the community, would have a transformational impact by extending rapid transit throughout our city.”

Hardwick says the development of a distributed light rail network is the best way of ensuring quick and convenient transit in all Vancouver and UBC neighbourhoods, while supporting plans for “gentle density”. Hardwick, is one of only two councillors to oppose the UBC subway extension in a 2019 City Council vote.

“Four currently planned subway projects in Toronto and Montreal range between $700 million to $1.1 billion per kilometre,” explained Hardwick. “Based on those excessive costs, it makes much more sense to stop a subway line to UBC and build 58 kilometres of light rail for less than one-sixth the price per kilometre. Frankly, it’s just a better investment for our tax dollars and ties in the whole city, rather than just one neighbourhood.” 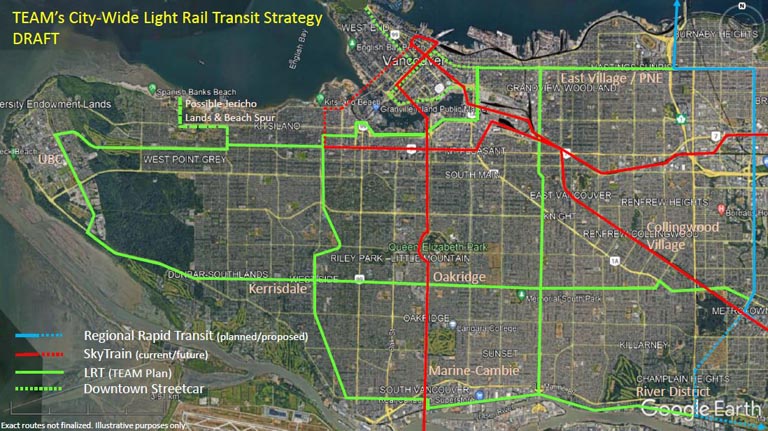 “In addition, a short extension of the Millennium Line into downtown Vancouver will improve access to the West End and Granville Island, eliminate inefficient transfers at the congested Commercial-Broadway Station, and enhance network resilience during any transit disruptions,” noted Hardwick.

Hardwick says 58 kilometres of light rail avoids tunnels and eliminates a massive source of carbon emissions. “Having multiple lines, rather than just one, takes cars off the road, and reduces congestion and greenhouse gases,” noted Hardwick. “Giving more people more options just makes good sense in so many ways that benefit our city.”

Hardwick says the “re-imagination” of the Georgia and Dunsmuir viaducts should include a design competition to enhance spaces beneath, freeing up $360 million in demolition costs to complete the long-planned downtown streetcar system.