Vancouver City Councillor Colleen Hardwick was acclaimed today as the mayoral candidate for TEAM for a Livable Vancouver, the party created last year to give residents a louder voice at City Hall. 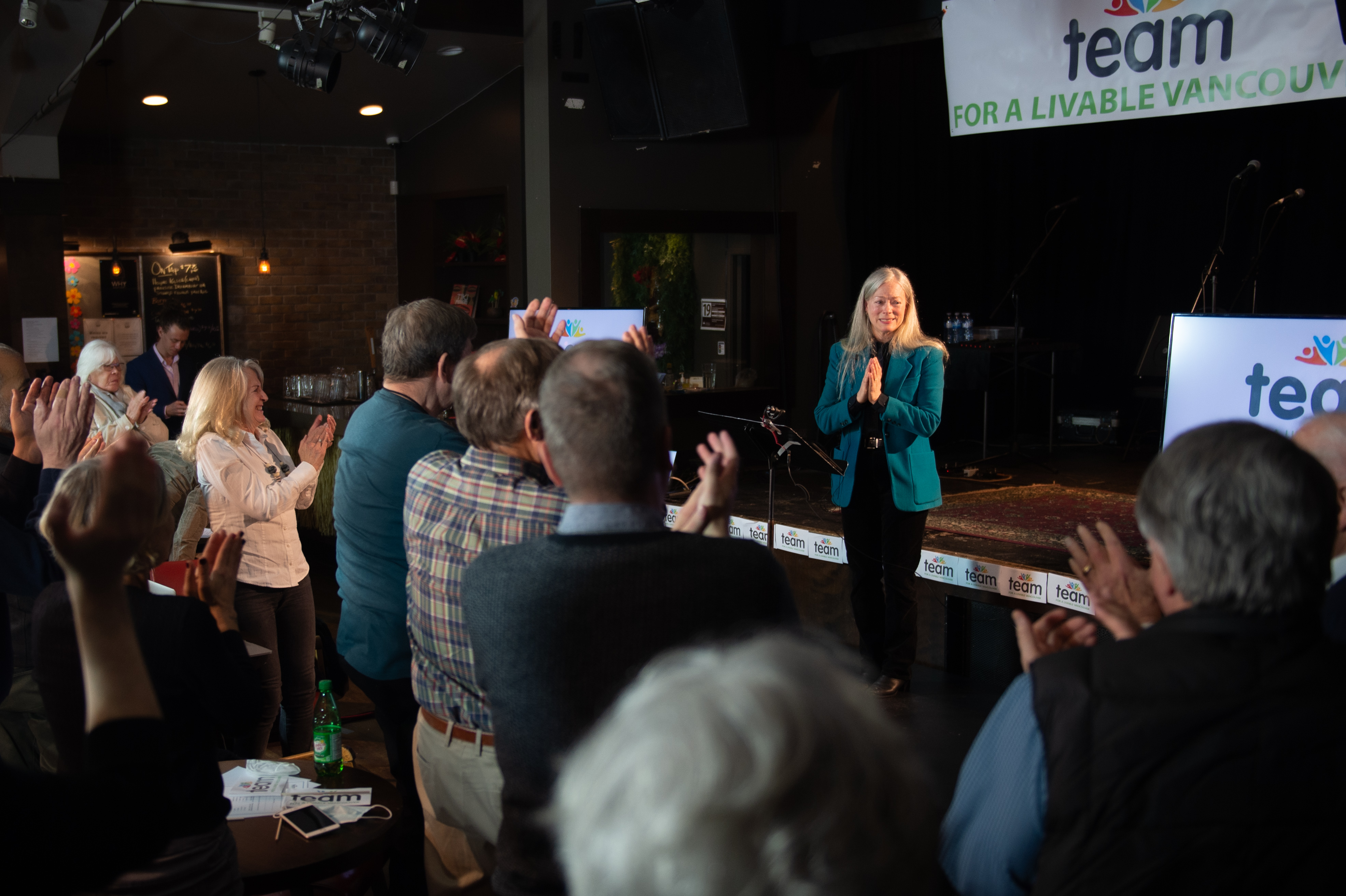 “Everyone in this room and online shares the same opinion – our city is not currently working for the betterment of all of our residents,” Hardwick told an enthusiastic, TEAM-flag waving crowd at the ANZA Club.

Hardwick said that every day, she hears from people unhappy with the City’s current direction. “Residents are frustrated and fearful. They worry about being forced out. They feel ignored by City Hall. They see taxes rising with nothing to show for it, while some private citizens pocket millions from public projects like transit, and for-profit rezoning.”

But our “broken” city can be fixed, Hardwick said. With smart policy and sound decision-making, TEAM will move the city in a better direction. Among its solutions: focus on basic City responsibilities, cut the 25-percent the City adds to housing costs, address the rising problems with safety, and reduce City Hall spending and ballooning staff levels.

“I feel your frustration,” she said. “I understand you are fed up. You want dramatic change, so support me, and my fellow candidates.”

Hardwick’s acceptance speech came after TEAM members ratified a nomination-committee report recommending her as the party’s mayoral candidate. TEAM President Bruce MacGregor said he was “honoured and excited” to announce she would represent the party in the October election.

“Colleen's life experience, as well as her relevant education, make her uniquely qualified to lead our great city. We engaged with a few potential mayoral candidates through an extremely open process, but at the end of the day, these individuals believed that Colleen was TEAM's most deserving and viable candidate.” Fortunately for TEAM, he said, some of these “very impressive and accomplished” people are considering running for Council positions.

“We congratulate Colleen. One week after International Women's Day, it is more than appropriate, if not long overdue, that we have a legitimate and deserving woman running to become the first female mayor in the history of this great city.”

Hardwick, who was elected to Vancouver City Council in 2018, is the third generation of her family to serve in elected office. Her grandmother, Iris L. Hardwick, was the first woman Park Board commissioner. Her father, Walter G. Hardwick, served three terms on council, from 1968 to 1974, as a member of The Electors’ Action Movement, the neighbourhood-focused inspiration for the current TEAM for a Livable Vancouver.

Hardwick's academic background is in urban planning, but she spent most of her career in film production and digital technology. She started and successfully ran a film-production company for many years, winning numerous awards, before selling it and turning to the digital-technology field.

Born and raised in Vancouver, she has two daughters, and during her council term has welcomed two grandchildren. She and her husband, award-winning actor Garry Chalk, live in a multigenerational household in Kitsilano. 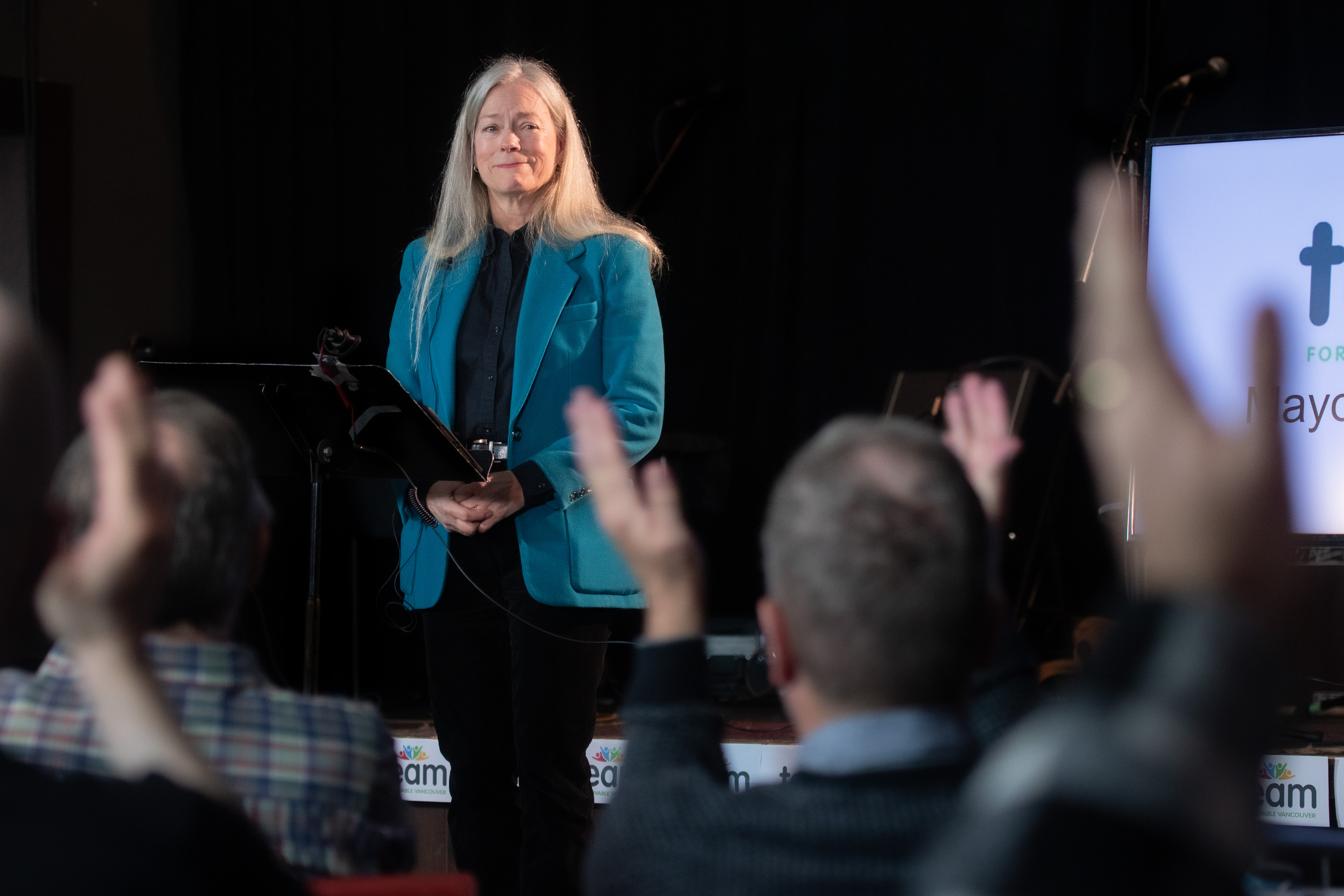