Vancouver - A new poll shows that TEAM For A Livable Vancouver mayoralty candidate Colleen Hardwick is in a tight 3-way race with Mayor Kennedy Stewart and ABC mayoral candidate Ken Sim – and that voters strongly oppose the Broadway Plan for massive high-rise development, something Hardwick has vowed to overturn.

The poll by Forum Research also shows that 83% of voters are very concerned or concerned about the amount of influence major corporate developers and others with significant financial interest in Vancouver issues have in City Hall decisions, said Bill Tieleman, TEAM Campaign Manager and City Council candidate.

And the poll found that Hardwick leads all mayoral contenders in second choice picks, meaning she has the greatest growth potential of the three top candidates, Tieleman said.

The poll, commissioned by TEAM, also found that a significant number of voters - 43% - believe it is important that Hardwick become Vancouver’s first-ever woman mayor.

“This poll shows that Hardwick, Stewart and Sim are all closely competing for mayor and that TEAM’s focus on opposition to the Broadway Plan and big money influencing City Hall is strongly aligned with voters’ concerns,” Tieleman said.

The Forum Research poll found that Sim has 18.7% of voters’ first choice for mayor; Stewart has 15.6% and Hardwick is neck and neck with 15.1%.  The NPA has 7.5% with now departed mayoral candidate John Coupar and Mark Marissen’s Progress Vancouver has 3.4%.  The respondents gave “another candidate not named” 5.6% and 34% were undecided. 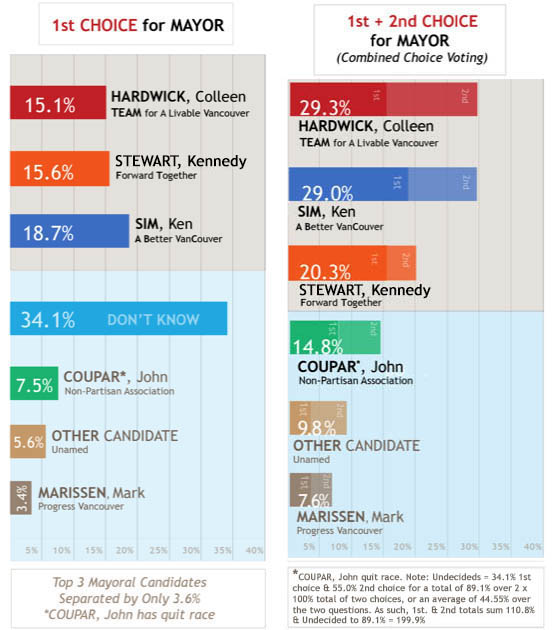 “We know campaigns matter and in the Vancouver election it’s clear that voters have three main choices – so putting forward the policies voters want will make a real difference,” Tieleman said.  “This election is an open 3-way race where mayoral debates and each party’s campaign will determine the winner.”

Poll respondents were 56% opposed to the recently passed controversial Broadway Plan which would put 20 to 40 storey towers throughout a 500-block area surrounding Broadway, with 41% strongly disagreeing with the Council majority decision, which Hardwick opposed and Stewart and Sim favoured, as well as ABC’s three councillors voting in favour.  Just 38% agreed with the Broadway Plan and 6% didn’t know.

“The Broadway Plan, with high-rise concrete towers displacing low-rise rental and thousands of renters facing demovictions, is a game-changer in this election” Tieleman said.  “Only TEAM and Colleen Hardwick fought the Broadway Plan all the way and voters opposed make up the majority of Vancouverites.”

The Broadway Plan opposition combines closely with the poll’s finding that 83% of respondents were unhappy with the amount of influence major corporate developers and big financial interests had at City Hall, with 59% very concerned and another 24% somewhat concerned, while just 13% were unconcerned.

“Voters don’t like the Broadway Plan and they don’t want big money deciding the future of Vancouver in their own self-interest,” Tieleman said. “TEAM has already stated it will reject donations from major corporate developers and others with significant financial interests in City Hall decisions – at the same time, Kennedy Stewart is having big developers host fundraising events for him and Ken Sim says nothing about restricting his backers.”

Tieleman noted that the results of the Forum Research poll mirror two other recent polls that showed Hardwick rising in voter support – one from Mainstreet Research and the other from Research Co.

Forum Research, who had the most accurate results of any pollster in the recent Ontario election, polled 358 voters across Vancouver in late July by interactive voice response random calling.  The results are accurate within a margin of error of 5.2%.