Jane Frost took on many challenges in her lifetime, but the last one was huge – guiding a new political party to a majority on City Council within a year of its creation. 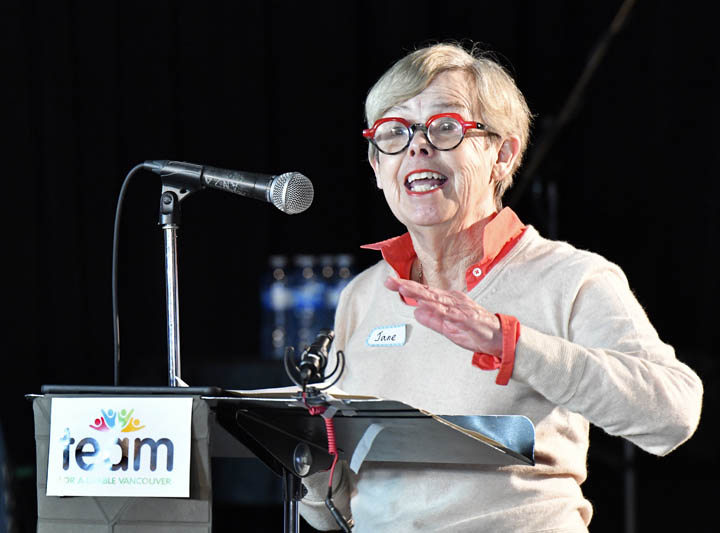 Jane, campaign manager for TEAM for a Livable Vancouver, died June 12 in the midst of her drive to sound the party’s pro-neighbourhood message loud and clear. She helped organize the May 7 rally against the Broadway Plan, a top-down plan that’s the antithesis of TEAM’s focus on community consultation.

From TEAM’s point of view, the rally was a rousing success. It drew hundreds of participants, significant media coverage, and raised residents’ awareness of how their city could be changed without their involvement.

But Jane, who had fought many courageous battles with cancer, went into hospital shortly after the rally, and died several weeks later surrounded by friends and family.

The day after her death, there wasn’t a dry eye on the regular Monday-night TEAM Zoom call that Jane had so often attended.

“She was my right hand for months and months and months,” said campaign co-chair David Gibson, who called for a minute’s silence in her honour. “She was of good cheer and more than anything, she loved to laugh.”

He said they talked every day, even from her hospital bed, but her voice got weaker and weaker until she couldn’t talk at all. “I know she would have said, ‘Never mind me, carry on, I may not be with you in person, but I will be with you,’” Gibson said. “I am heartbroken.”

TEAM mayoral candidate Colleen Hardwick, who has known Jane since the 1990s, said “her loss is very profound.” Recalling that she was at the rally only a month ago, she said: “She was one-hundred-percent committed. I have to believe she will be with us in spirit even if she isn’t here in person.”

Speakers pointed to the depth of political, professional, and charitable experience that Jane brought to TEAM. A fourth-generation Vancouverite, she took part in her first political campaign at age 10 – riding a fire engine in a parade supporting Garde Gardom and Pat McGeer – and from then on, politics was part of her life.

Professionally, she served as vice-chair of Vancouver’s Port Corporation, worked at Transport Canda for more than a decade, and was a highly regarded treaty negotiator for Crown-Indigenous Relations and Northern Affairs Canada.

Her experience with cancer transformed her into an international proponent of dragon-boat racing. A founding member of Abreast In A Boat, the first breast cancer dragon boat team, she went on to establish the International Breast Cancer Paddlers’ Commission and was its first elected president. There are now 250 teams in 32 countries.

Jane was immediately impressive, said many of the speakers who had known her only since they joined TEAM.  Former president Bruce MacGregor, who now sits on the board, said he only met Jane when he took on the presidency, “but in seven to eight months, she became a dear friend.”  She was a “very vibrant, passionate and smart woman” who had led a very accomplished life, knew her way around a campaign, and was smart as a whip, he said.

Similarly, Stephen Mikicich said he first met Jane when he joined TEAM, but in their first brief conversation, “what was immediately apparent was her strength and commitment, and the class she brought to the room.”

Brian Palmquist said the rally Jane helped organize was typical of her efforts – “passionate, engaging everyone, encouraging us all to do the best we could for our city.” She’s left a big gap, he said, and the job now is to do the work “she would be urging us to continue.”

TEAM secretary and board member Sal Robinson echoed that. “She was absolutely committed to getting Colleen elected and now we have to do that for her."